Allocating Taxes under Pillar Two In many cases, no specific allocation is required as a constituent entity will simply pay tax on its own income in the jurisdiction where it is located. However, this will not always be the case. As such the Pillar Two GloBE rules include mechanisms to allocate covered tax between different constituent entities.

Covered taxes are allocated to a PE under Article 4.3.2 of the OECD Model Rules by the following mechanism:

1. Identify the PE’s share of the main entity’s domestic taxable income. This should be able to be identified from the corporate income tax return process.

3. Determine the amount of any tax credit allowed in the main entity in respect of the PE’s taxable income.

The tax determined using these steps is deducted from the covered tax for the main entity and allocated to the PE.

Note in this case, any deferred tax asset created and subsequently unwound in the main entity isn’t taken into account in adjusted covered taxes by either the PE or the main entity. This does not affect the treatment of the domestic law tax loss, which is subject to the general deferred tax regime.

In the case of a tax transparent entity, the tax of the partner or member as determined above is allocated to the PE under Article 4.3.2(b) of the OECD Model Rules.

The same approach taken to allocating covered tax to PEs can also be used to allocate covered taxes to CFCs under Article 4.3.2(c) of the OECD Model Rules, given this is essentially a similar scenario. Note, however, the below push-down limitation rule for passive income.

A hybrid entity is an entity that is treated as opaque for tax purposes where it is located but tax transparent in the jurisdiction of its owners.

Note, however, the below push-down limitation rule for passive income.

Tax on Dividends and Distributions

Withholding tax incurred on dividends received from another constituent entity is allocated to the distributing company under Article 4.3.2(e) of the OECD Model Rules.

Covered tax that relates to passive income allocated to hybrid entities or CFCs is restricted to the lower of:

This is provided by Article 4.3.3 of the OECD Model Rules.

Any remaining covered tax is allocated to the owners (eg the company with the CFC regime in place).

This ensures that the tax allocated to a CFC or hybrid entity in relation to passive income is sufficient to reach the 15% global minimum rate and does not artificially increase the covered tax of the CFC or hybrid entity (which would increase its ETR and reduce any potential top-up tax liability).

MNECo1 is part of an MNE group subject to the Pillar Two GloBE rules. It is resident in a Country A that has a domestic corporate income tax rate of 20%.

MNECo2 is a wholly-owned subsidiary of MNECo1 and is resident in Country B, which has a corporate income tax rate of 10%.

Country A has a CFC regime which taxes the foreign passive income of MNECo2. 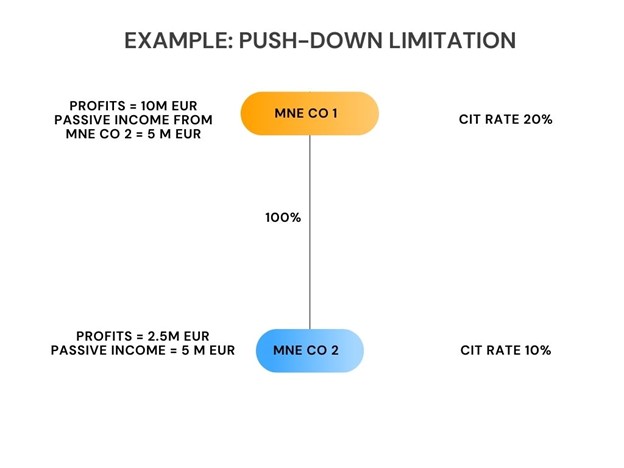 This is beneficial given the lower rate of corporate income tax in Country B. However, given the CFC income relates to foreign passive income the push-down limitation needs to be considered.

As such although the actual amount of CFC tax in MNECo1 is 500,000 euros, only 250,000 euros can be allocated to MNECo2 for its adjusted covered tax calculation.

The final Pillar Two GloBE ETR calculation for MNECo1 would be:

The final Pillar Two GloBE ETR calculation for MNECo2 would be:

This would have had the effect of reducing top-up tax in Country B with no Pillar Two impact in Country A as its ETR is above the 15% global minimum rate.

This website is not affiliated with, endorsed by or related to the OECD. We provide independent insights and analysis on the OECD Two-Pillar Solution

© 2022 OECDPillars | All Rights Reserved
Menu
We use cookies on our website to give you the most relevant experience. By clicking “Accept All”, you consent to the use of all the cookies. However, you may visit "Cookie Settings" to provide a controlled consent.
Cookie SettingsAccept All
Manage consent

Full access to all articles, analysis, modelling tools and trackers.